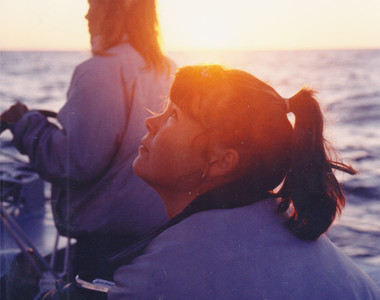 “At 26 years old I captained the yacht ‘Maiden’, with the first all-female crew to ever sail around the world. We were told we couldn’t do it, but we showed how sailing is a level playing field. Now, I’m making it my mission to advocate for girls’ education around the world.”

Tracy Edwards is a British skipper. Hailing from Pangbourne (England) she went on backpacking trips straight after school and made a living from occasional jobs.

She became a stewardess on various charter yachts. Here, she discovered her love for sailing and worked her way up to be a first mate eventually. It was on one of the yachts where Tracy Edwards got to know King Hussein I. of Jordan in 1985.

With his supports she succeeded to take part in the famous Whitbread Round the World Yacht Race in 1989 - as the first skipper with an all-female crew. They won two legs and came second overall. After the race Tracy Edwards become the first woman to receive the Yachtsman of the Year Trophy and was appointed MBE.

She has written two autobiographical books and has made it her new mission to advocate for girls’ education around the world with "The Maiden Factor Foundation". g.